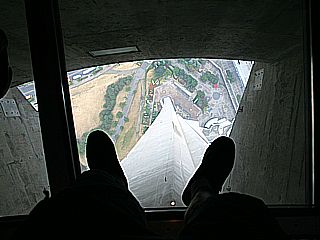 I get sick just looking at this picture.

I couldn’t do that, what those kids are doing. I’d probably pass out if you made me sit there. 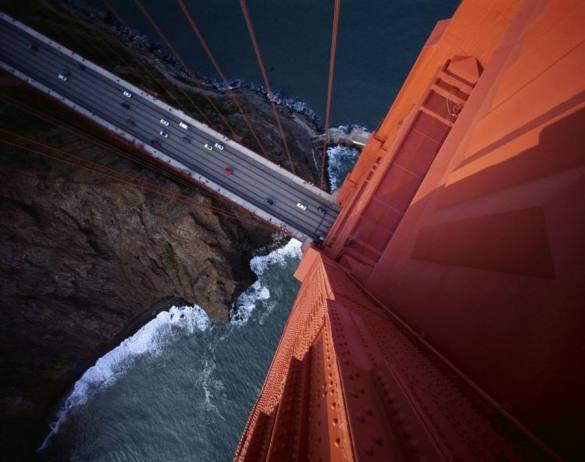 I grew up in San Francisco, and I’ve gotten seriously dizzy just looking up from this same angle. Looking down is nothing less than fearful for me, even in just a picture.

Recently I was talking about a bridge on the local college campus as “the bridge with ridiculous low railings” and the person I was talking to said:

“What do you consider ‘ridiculously low’?”

Heck, pretty much anything below my waist is too low!

But I’ve fought this fear from as far back as I can remember.

I rock climb, both indoors and outdoors. Scares the living hell out of me to get more than ten or so feet off the ground, but it still love climbing even minus the rope.

I peak out over the edge, sometimes crawling up to it, even when every part of me is screaming to just leave it alone.

I don’t think you can conquer this kind of fear, this isn’t fear of spiders or of social situations. I’m afraid of falling, or to be more specific the fall would probably be nice (not that opposed to sky diving even though I’m sure I’d have a nervous breakdown in the process) it’s the landing part that scares me.

Ever seen the movies where people fall to their deaths off buildings? Almost never done realistically.

If you reached critical velocity, you would be flattened in an instant. Not even worth putting that to a movie scene, no drama and splat. Just one second you are whole, the next you are liquid.

If you didn’t you would bounce, yup that’s right … bounce.

You would still die, but not before flying up into the air once again as a fleshy blob before returning once more to Earth.

But none of that scares me all that much.

Death itself doesn’t scare me that much, not as much as it should anyway.

But no matter how hard I try to beat it back I have to admit my fear is that of high places, and if you mess around and joke like you are going to push me I’m more likely to either hit you or start crying than I am to join in on the joke.